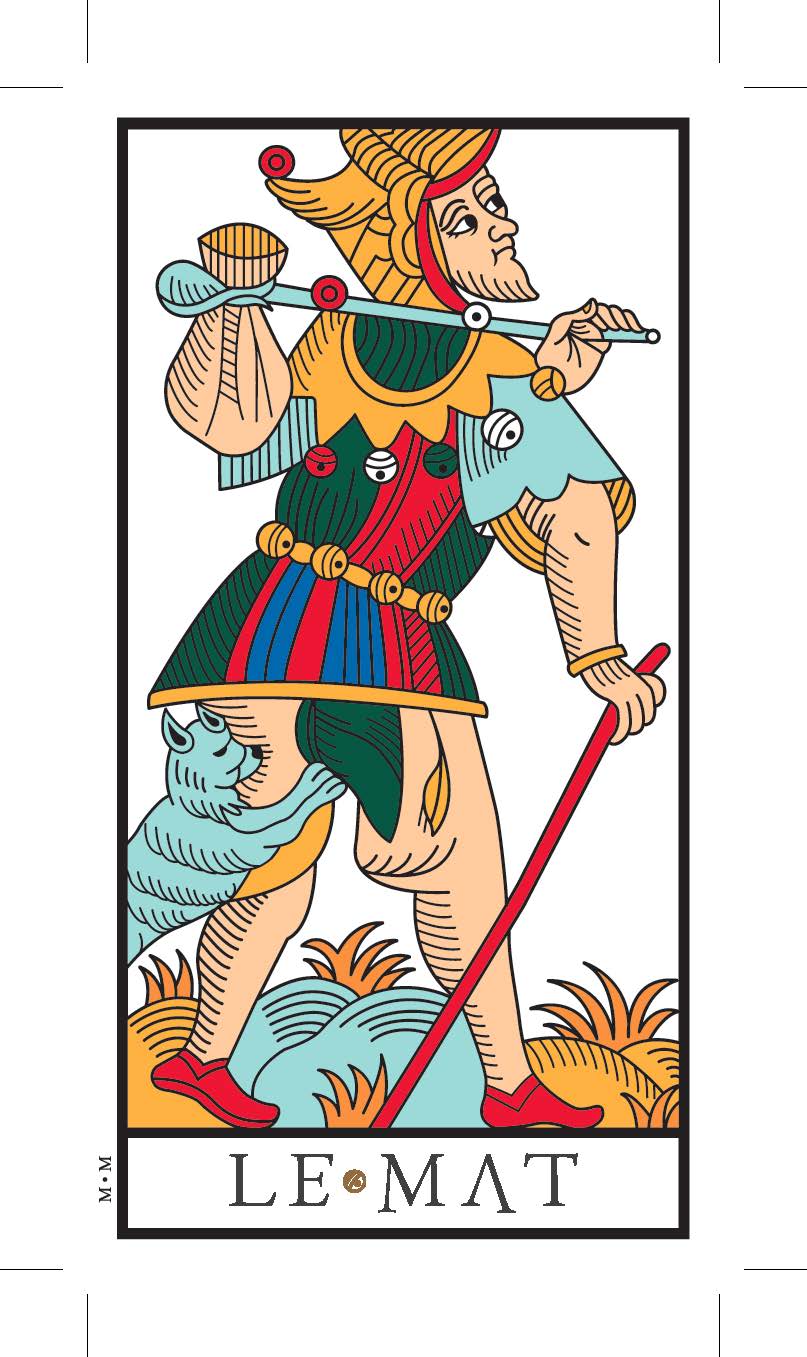 Le Mat: A Talk with the Master and the Perfumer

Stefania talks with Carlo, the Tarot Master she follows and admires

S In a few lines what does Le Mat represent in Major Arcana? (What do you usually say, when you have to share and to explain something about Le Mat for the first time?

C The archetype Le Mat represents the human being who awakens to a new dimension of life, a dimension in which he listens to the still weak whisper of his Soul that pushes him to seek a meaning of existence that is placed beyond the material realm of sensory reality.

S In my personal experience there is a funny and big misunderstanding about the meaning of the name: Le Mat. Il Matto. Le Foul. Almost everybody I met thought that Le Mat is the symbol of craziness. To me it means being free and true to your core personality. Maybe others regard this as being crazy. What meaning was put in the name Le Mat originally?

C In Tarot there is a coding system that allows to discover the existence of different levels of comprehension. In the icon of Le Mat, for example, there is a precise linguistic reference that allows us to reveal that Le Mat is not a fool, as generally imagined, but a dead man, in the initiatory sense. Le Mat, in fact, comes from the expression “Shāh Māt” which in ancient Persian indicates “the Death of the King”. Le Mat, therefore, walks along a path in which he seeks his new life, his spiritual rebirth, his Renaissance.

S Why is Le Mat the only Tarot Majors Arcana without a number?

C The icon of Le Mat is without number because it represents the totality of the Tarot, as if it contained in itself all the other 77 Arcanes. In practice, it is a special icon, a sort of essential synthesis of the meaning of the evolutionary path of consciousness described by the symbols of the all cards.

S Is there any relation with the Joker card in modern playing cards?

C The figure of the Joker comes precisely from the symbolic meaning of Le Mat. It is not the opposite, as some believe. This is because Le Mat is free to move along the various stations, i.e. the various icons of the Tarot System. In this sense it represents freedom, the absence of borders, the possibility of becoming what he desires to be!

S What did you yourself learn from this card, Le Mat?

C Through this icon, and from the whole deck of Tarot in general, I learned about love for life, love for myself and love for others, realizing that thinking of the so-called reality in exclusively terrestrial and material terms is a limitation of human thought: true realism is what combines the visible and the invisible, the logical and the illogical, the masculine and the feminine, the I and the We, Earth and Sky.

S How do you think the perfume interprets some of these layers of meaning?

C The term perfume bears in itself, in its etymology, the concept of fumus, that is the vapor, the spirit that expands through. In this sense I would say that Le Mat, representing the human being who moves towards the breath of the Spirit, perfectly embodies the idea itself, the archetype of the perfume in his essence.

S How will you explain the big succes of Le Mat Extrait de Parfum of Mendittorosa?

C I can’t say, from a commercial point of view, why the perfume has been so successful. I can say, however, that Le Mat, together with the Tarot, is an unstoppable, enthralling energy, the energy of the Soul destined to spread all over the world, regardless of the forms and external disguises it assumes to be able to reach the heart of every single human being.

S When I came to you in Paris back in 2014 with the Tarot Card of Le Mat in my hand and started talking about my vision of a perfume interpreting the card, had you ever heard about Le Mat before?

A No, I’ve never played Tarot so I didn’t know before about this card and this personality Le Mat, but from beginning it inspired me very fast

S How did you go about the work?

A The card was so inspiring, so I could start to work from that. Then I understood more with your explanations about the person who walks towards a future he doesn’t yet know. A person who needs an aim in life, and who is pushed by the dog to go on.

S What was the starting point of the olfactive formulation?

A As Le Mat needs to know the past to move forward in life, I thought very naturally of Chypre. The Chypre family of fragrance is the beginning of the perfumery, and we need to know the past accords to create the future accords. It’s like the story of Le Mat.

S Can you share with me and Le Mat lovers more about the balance in the perfume of natural and synthetic oils?

A There is a lot of natural oil in the composition such as patchouli, rose, black pepper, nutmeg and immortelle flower which is the originality of this CHYPRE perfume. Normally it would have been jasmine, but here I used immortelle as a symbol. Meaning that the soul of Le Mat can be everlasting.

S Normally we work through many interpretations of the perfume before we are finished. This was an instant hit. Like a song just born very quickly and perfect from the start, but why did you call it No. 2?

A It’s was like that evidently. I think we felt exactly the same emotions at the same time smelling Le Mat. It’s really rare. But one try is often not enough to get the perfect balance, that’s why I presented the second version.

A I was not completely satisfied with the first one, but got the perfect balance in the second try. When you smell No. 2, it is like a harmony. In the first, there was a misunderstanding between two materials.

S Why do you think Le Mat perfume is having such a big success – and actually you called it “Success and Le Mat”, when you sent the first to me. What a premonition?

A  Yes, I remember, and I believe in the signs. To me, Le Mat is the incarnation of the freedom, and when you are free in your mind and in your thoughts, you succeed in your plans. That’s why I named it “Success and Le Mat”. The opposite of the expression in the game of chess, where you finish with “Echec et Mat”. In French echec means failure, and this was a success!

S What do you think of the review of Le Mat by Luca Turin?

A  I am very glad, because we all admire this man. I am very proud. It was really emotional to read his review! 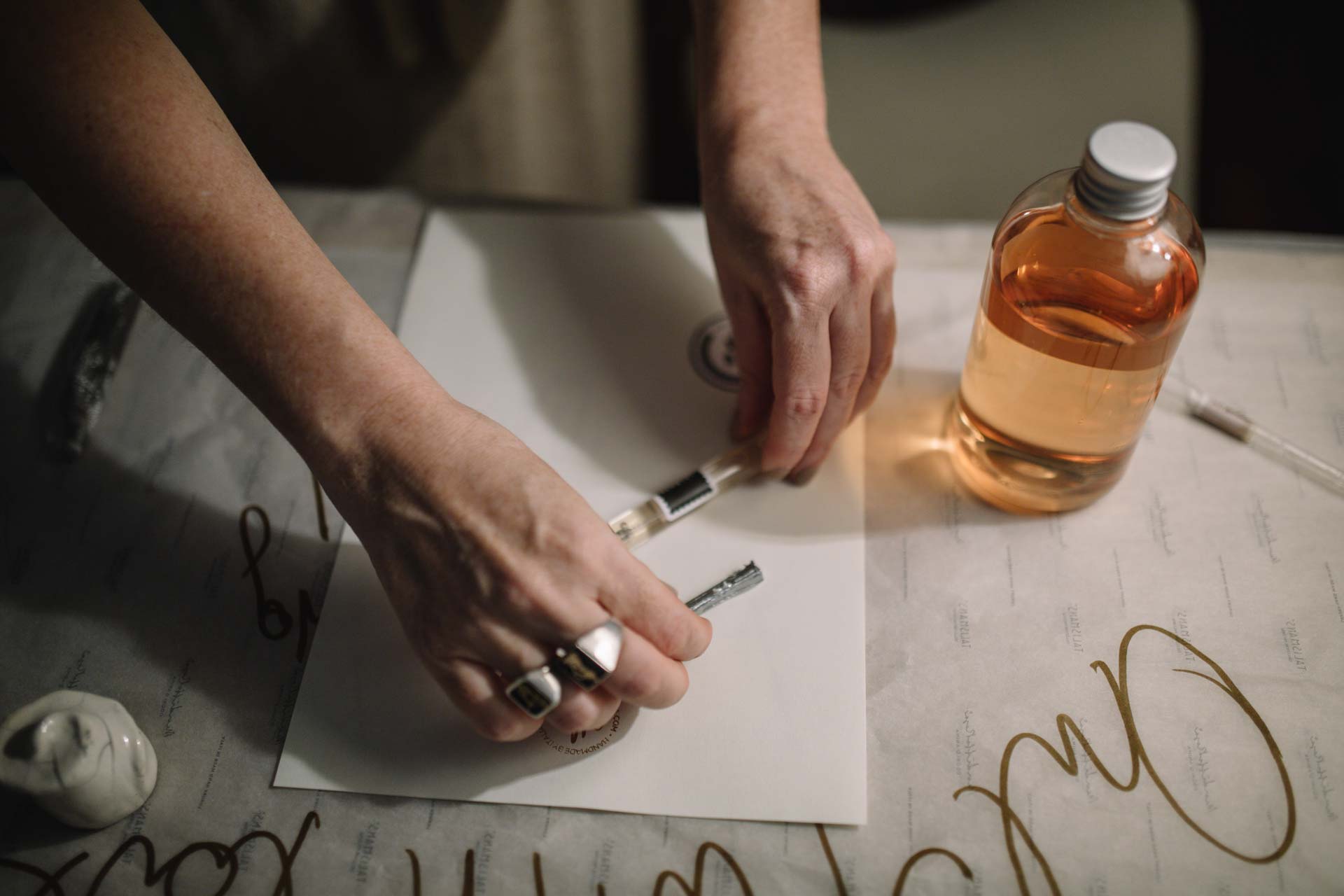 The Mini Self Service Project

Getting ready to transform bad in good. Plomb in t

From Santo Stefano to San Gennaro. HOPE in miracle

To stay. With Stanze Home Spirits Collection. #me